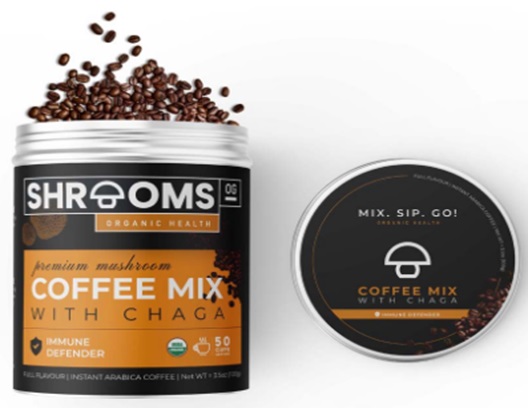 With the rise of super herbs and adaptogens, nutrient-rich wellness coffees have become increasingly popular. And it is only natural that we would want to do some good for our bodies by using our well-established daily routine of drinking our favourite morning beverage. Adding an adaptogenic mushroom to your coffee is the simplest way to reap the advantages of this ancient fungus. Mushroom coffee Chaga is one of these mushrooms, and it is often seen in pre-packaged wellness coffees since it is high in strong antioxidants that can help you stay healthy and avoid disease.

What is Chaga mushroom?

Chaga mushroom is a parasitic mushroom that grows on trees and resembles a charred piece of wood. It prefers birch trees, but it can also be found on elm and alder trees. Chaga makes its way into a wound or crevice in the bark of a tree and grows beneath the tree’s epidermis until it finally breaks out as a cracked and shattered projection. Unfortunately, because Chaga kills trees from the inside out, the tree is nearly dead when it juts out from the bark.

Chaga is thought to have a variety of health benefits, according to practitioners. Chaga is thought to help combat inflammation, regulate blood sugar, lower blood pressure, relieve arthritis, and perhaps prevent or halt cancer progression. Vitamin D, iron, magnesium, potassium, manganese, and calcium are just a few of the critical minerals found in mushroom coffee chaga. Here are the few health benefits why you need to drink Chaga coffee.

Chaga may help prevent or reduce the progression of certain liver disorders. The Korean researchers found that a water-based extract of Chaga might protect biopsied liver tissue from the oxidative effects of a substance known to cause liver damage.

Chaga may aid in the management or prevention of diabetes. The hypothesis is based on the blood sugar-lowering effects of plant-based polysaccharides. Those present in specific mushrooms, like Chaga, are thought to be particularly powerful.

Chaga has anti-cancer properties. An alcohol extract of Chaga was claimed to have activated apoptosis in all cell types in a series of test-tube tests involving lung cancer cells. Researchers are increasingly considering the potential that Chaga mushrooms may prevent cancer or halt its progression. Antioxidants, which help prevent cell damage produced by free radicals or oxidants, are abundant in Chaga.

How to drink Chaga coffee?

Chaga is a flexible supplement that can be used in a variety of ways. Chaga is best consumed by mixing it with hot water as a substitute for tea or coffee to enjoy all of the miraculous benefits of this great mushroom.

Chaga mushroom supplements and herbal teas are both accessible. People should seek medical advice before attempting to produce their Chaga supplements or incorporating Chaga into their diet. Chaga can assist in boosting the antioxidant effects of coffee while also aiding digestion and reducing the jittery effect it has on the body. If you do not have any serious health issues, Chaga mushrooms could be a great addition to your regular self-care regimen.

How has the coronavirus pandemic changed the world’s attitude towards health?

Why are men getting more into peptide use today?

What are lipotropic injections?

How To Get Stronger Without Visiting The Gym

Legal Marijuana: What Would Nationwide Home Grow Look Like