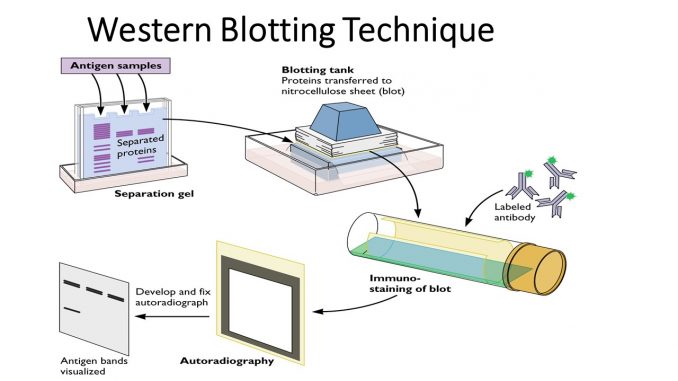 You probably already know that blotting — or the transfer of molecules, such as proteins and nucleic acids, from gel onto a solid membrane — is a key technique in detecting target molecules. You probably also know that there are several blotting techniques, such as Southern, northern, western and more.

But do you know why these blotting techniques have the names they do? (Here’s a hint: They’re not actually named after compass directions.)

Read on to learn how western blotting got its name, and how it differs from Southern and northern blotting.

It all began in 1975, when molecular biologist Edwin Southern developed a new way to analyze the abundance, identity and size of DNA. His method used electrophoresis to separate differently sized bits of DNA, then transfer samples to a membrane. There, a radio-labeled DNA probe could be used to detect a targeted DNA sequence within the sample. Southern named the technique after — you guessed it — himself.

A few years after the invention of Southern blotting, researchers at Stanford developed a similar technique. While the new method also utilized radio-labeled DNA probes, it was used to detect specific RNA molecules within samples, rather than DNA.

In what was perhaps a humorous nod to Southern’s work, the three scientists decided to name the new method “northern blotting.” These two techniques set the stage for the development of future blotting methods.

What is Western Blotting?

The technique works by separating proteins on polyacrylamide gel through the use of electrophoresis. The separated proteins are then transferred onto nitrocellulose paper, and a blocking agent stops non-specific binding. Finally, primary antibodies are used to bind specific proteins.

The proteins are detected in one of two ways:

Burnette named his technique “western blotting.” The name refers to both the Southern and northern methods, as well as gives a nod to his lab on the west coast. The name generated some controversy; Burnette submitted his findings to Analytical Biochemistry in 1979, only to have his work rejected due to the name he’d chosen.

At the same time, Harry Towbin at the Friedrich Miescher Institute and George Stark at Stanford developed similar methods. All were inspired by northern blotting.

However, perhaps ironically, the “western” moniker stuck in the end and became widespread. Despite early controversy, the western blot method gained in popularity.

Other blotting methods have since followed the naming convention, such as:

These blotting methods share a similar methodology. However, they differ in which molecules, exactly, they target. Though he may not have realized it at the time, Edwin Southern’s naming convention and his technological breakthrough would both make a significant impact.

Do I need a Referral to Visit a Gastroscopy Clinic in Singapore?